In todays post I would like to write a little bit about the Norwegian politics and this is because two weeks ago (28.08.15) our school vas visited by Erna Solberg, who is the Prime Minister here in Norway. She was accompanied by Lisbeth Hammer Krog-mayor of Bærum and Anette Solli- county mayor of Akershus. Therefore I will be talking about what her duties are in the parliament, and what was the point of her visit in Sandvika secondary school. 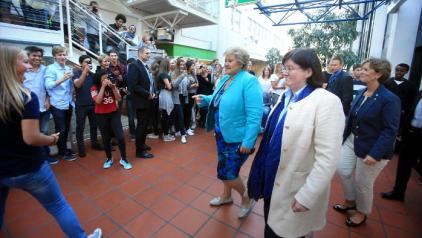 Norwegian Prime Minister is the country’s head of government, she carries much of the executive power that accrues to the king by the Constitution. Unlike their counterparts in the rest of Europe, Norwegian Prime Ministers do not have the option of advising the King to dissolve the Storting and call a snap election, the Storting must serve out its full four-year term.

Solberg came to one of the best schools in Bærum, to learn more about the different projects which are being held at this particular high school. She got to know that at our school 3 of the first year classes got digital books, which gives them many benefits. She learned more about the schools organization, eg. fagdager, which means a whole day of one subject. During the school visit on Friday the Prime Minister received an introduction on the new safety and emergency response systems VoKS, which during the school year will be implemented at all secondary schools in Akershus.

I think that our school can be proud of having over such a special guest, because not many students get the opportunity of meeting an important person in the country. I hope that in the near future our school will be even better in using digital books and that the Prime Minister will be able to visit our school even more times.

In todays English lesson, we are going through a story written by a norwegian- english author Roald Dahl. His short stories are known for their unexpected endings and his children’s books for their unsentimental, often very dark humor. ”The Landlady” also is this type of story.

17- year old Billy Weaver is a boy from London, which has just arrived in Bath to start a job in business. He was supposed to find his own place to stay, so he was heading to the ‘The bell and dragon’ hotel which someone earlier that day had recommended him. Walking by a row of houses, he saw a notice offering bed and breakfast. The lady seemed very kind, but there was something wrong about her which he didn’t notice at first. After a conversation and drinking tea made by her, she confessed to him that she likes to stuff dead animals, and she made it clear to him that his drink was poisoned. He realized that she wasn’t offering bed and breakfast.
In my opinion the story seemed very captivating and interesting, but the ending is not what I was expecting at all. I think that the author has done a great job making us believe that the landlady was harmless, while she was the victim of the novel. Somewhere before the ending, i realized that she was up to something, but it was near the very last setning of the story that we get to know to what she had planned. In my opinion, the story was very breathtaking and it made the reader want to finish it. 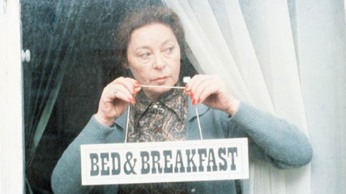 After watching the short film based on the story which we have read earlier today, I can now compare the similarities and differences about the two things and give my opinion on how both of them came out. The whole storyline is exactly the same as in the novel, but there are some thing that make it a little bit different. Apart from small unimportant exceptions, the most important thing which we get to see in the movie, is the actual process of what the woman does to her offers, which isn’t described by Dahl. In the book we have to imagine it ourselves, while the short film gives us a certain image of what she is doing. I think that both ways of telling the story are a good idea. By reading, I got a brief image of what happens, and it gave me a good opportunity and a lot of space to envision the events, but by watching the film I had everything already explained.

I enjoyed both the story and film, and I can highly recommend reading other Roald Dahl’s stories.

Visitors around the world